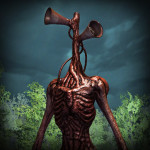 Instead of watching scary movies, try a quick Siren Apocalyptic game. Travel to a strange island where strange things have been happening for quite some time. Some reports claim that an otherworldly entity is roaming those lands. A creature is so ancient and powerful that bullets have no effect on it. Still, it's a good idea to have a gun on hand. Who knows what other monsters will be waiting for them at the destination?

WASD is used to move around and the mouse is used to look around. RMB is used to aim down sights, and LMB is used to shoot. To jump, press Space, C to crouch, and E to interact with the environment. To find out where to go next, use the Tab key to open the map. Look for cabins where the previous owner may have left some supplies or important items.