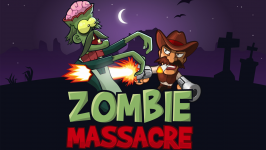 Zombie Massacre is a video game about fighting zombies that takes place on the American frontier. Most of the individuals infected by these hideous green zombies weren't prepared for a Zombie Massacre, but you are. In reality, you've journeyed to the land of the living dead to hunt down every single one of these heinous beasts!

Defeat as many zombies as possible using the weapons at your disposal. You'll collect points and unlock weaponry as you move through the stages, which you can then buy and improve. Support items like as medkits, ammo, and other supplies can also be obtained to help you in this action game.