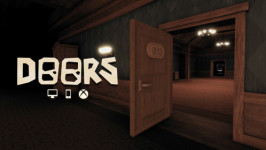 Roblox Doors is not new to horror, with a slew of high-profile games currently accessible and waiting to frighten the crap out of you. If you're courageous enough to venture through that door, the new horror game on the block offers various secrets to solve.

Players in Roblox Doors can work in groups of four to maneuver their way through a succession of rooms. The goal is to clear 100 rooms without being killed by any of the monsters known as Entities.

Within the lobby, players can enter elevators with up to four other players to explore The Hotel. Players begin in the elevator and are given a pre-run shop where they can purchase four items: vitamins, lockpicks, lighters, and flashlights.

Players will visit the Reception Room after exiting the elevator and must obtain the key from the billboard to unlock the doors. The game continues by entering the following doors to enter the next room.

Almost every subsequent room is generated at random, with a set of prepared rooms that appear in a different order in each game played.