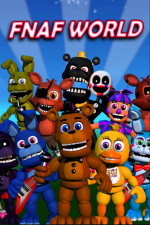 FNaF World is a role-playing game with a turn-based combat system where the protagonists are the characters from the popular horror franchise Five Nights at Freddy's. FNaF World's story is just as crazy as its cast of characters permits. Basically, you play more than 40 characters from the FNaF universe as they embark on an adventure through a fantasy world shared with other evil creatures.

Control Freddy and the gang as they embark on an adventure in the world beneath the worlds. Lead your team deeper into this digital world to discover the source of these glitches and monsters and return it to its original purpose as a safe haven. You must have completed the game on either Normal or Hard difficulty. Hold up against the door of the grey house in Area 1, talk to Fredbear after you leave then enter the portal.